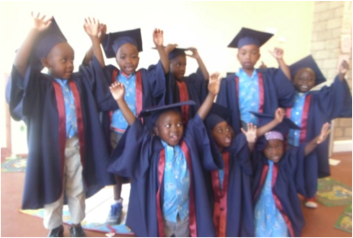 “More of the older children, known as  ‘Eagles’ have flown from the nest!  August 2013 saw 8 more MTCC children graduate to primary school.  Two have gone to Mchiru Private School, while the others have stayed very close at St James’.  One of the success stories from the group was of a young boy who had been attending the centre since it was opened.  He arrived with no communication and exhibited inappropriate behaviour.  With the patience and commitment of the Care Givers, he developed strong language skills, interacting with other children, enjoying taking part in activities.  On Graduation Day, his parents could not speak highly enough of the changes they had seen.  He has started off very well in Standard 1.

The year has seen many themes give way to creativity and inspiration in a number of different ways.  Children have learnt new songs, games and stories, shared baking time, produced artistic masterpieces and always enjoyed playtime.  There was even a wedding in our youngest room, Doves!  Learning about Malawi led to a trip to the Museum of Malawi, where the children saw life-size models of rhinos and hippos – something many have only ever seen in pictures.  They also got the chance to see old buses, the first fire engine of Malawi, and one of the old trains from the railway.  The children have visited our very own Beehive Construction Team, and learnt about the JCBs they often see nearby.  It’s been a busy few months, and continues to flourish.”

Awareness of our new UK social enterprise is growing and gaining a life of it’s own, we were delighted to find this article about us… Please click this link to read the article

Our thanks go to Ben and the team at Stone Group for the wonderful ICT equipment they donated to us. All the equipment has been loaded on to our latest container, it’s currently on the sea and is being eagerly awaited by the students at JPII IT Academy in Chilomoni.

Many thanks from all at Krizevac Project to the team at JCB World Headquarters, Rocester, for their kindness towards children at Mother Teresa Children’s Centre. Suvi Toropainen, Marketing and Communications Manager for JCB Africa and Middle East contacted Krizevac to say they would like to donate some special JCB  toys as a Christmas gift to…

In 2010 Krizevac Project was fortunate to recruit two wonderful early years trainers, we knew that they had the most important job we had ever tasked a volunteer to do: we asked them to train the team of Malawians who would grow and lead Mother Teresa Children’s Centre. A task they accomplished with skill and…

Thanks to Transport for London, these brand new shiny “Boris Bikes” have arrived to help transform Chilomoni. Three months ago the Krizevac team loaded them up into our 17th shipping container of the year, “We’ve turned pedals, handlebars, lifted and loaded 1830 bikes this year”, Zoe Kasiya, Resources Manager for Krizevac told us, “it’s a lot…

Update on how our littlest ones are faring in Malawi. Lovely to here about such positive progress, especially when times are not so easy in Chilomoni right now. Congratulations to the wonderful team of Care Givers for doing such a great job. Click here to view the MTCC Newsletter

This site uses Akismet to reduce spam. Learn how your comment data is processed.