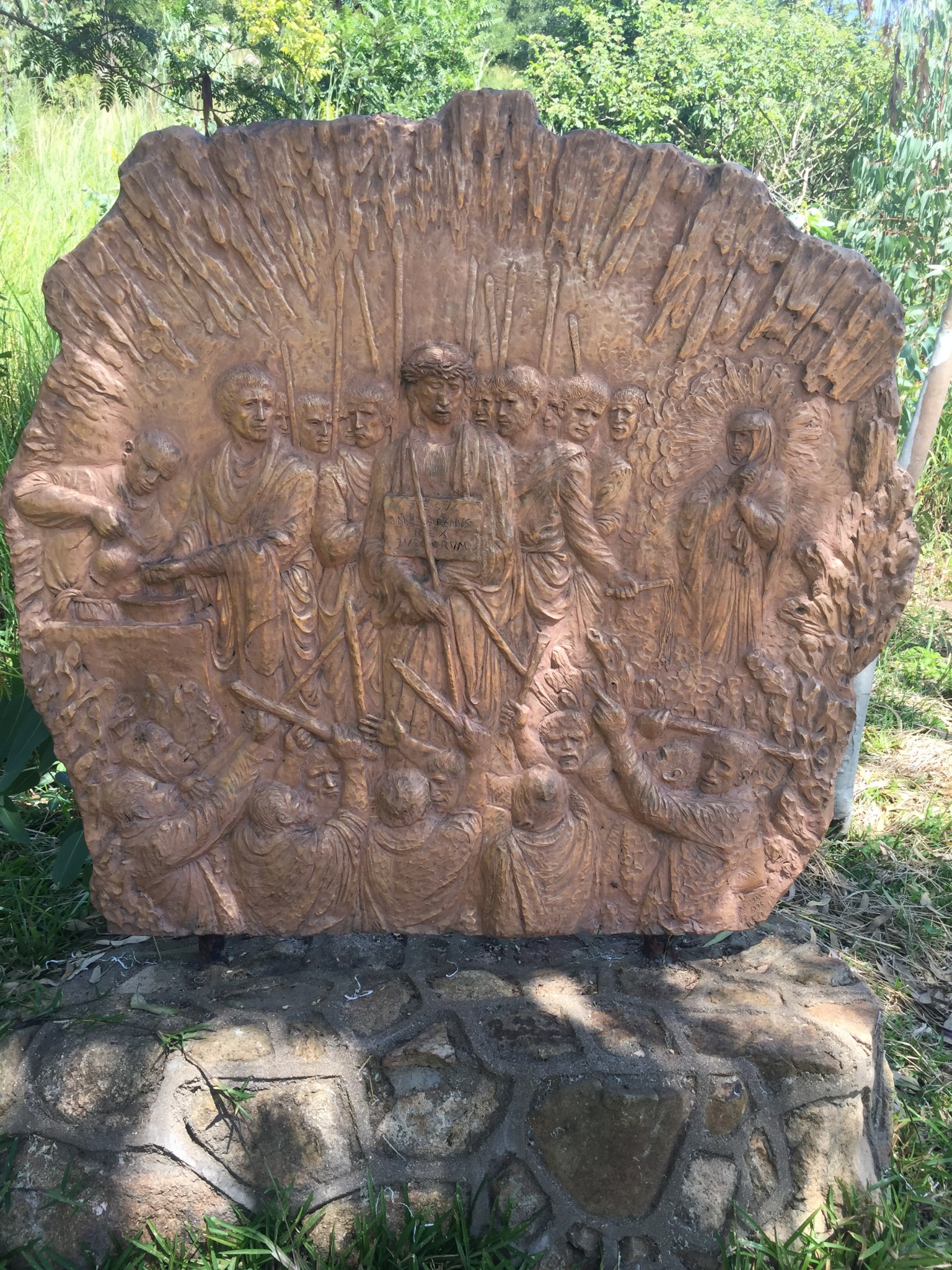 Jesus is between the soldiers and Pilate. Below is the enraged mob. They want Jesus crucified. People, angry, influenced by the chief priests, are shouting and threatening with their fists and with sticks raised. The soldiers and the people are awaiting Palate’s verdict, who, after a fearful attempt to save the Man, washed his hands and handed Him over to His killers.

The hurt pride and vanity of the Scribes and Pharisees are changing to, “Crucify Him! “Among the fists and sticks which were raised in a sea of hatefulness, the Christ, who, in spite

Of His disfigured body, resulting from the many beatings, still shows His majestic grace. He directs His gentle, sad look towards those who condemn Him, and penetrates their hard-

Shelled hearts. From His swollen face, forgiveness is sensed

For the whole of ungrateful mankind

The only comfort to Jesus is the presence of His Mother. Her presence is discreet, but real; their hearts blending into one pain.

From the Bible: Yet I. like a trusting lamb led to slaughter, had not realized that they were hatching plots against me: “Let us destroy the tree in its vigor; let us cut him off from the land of the living, so that his name will be spoken no more.”‘
(Jer 11:19)

We adore you, O Christ, and we praise you.
Because by your holy cross you have redeemed the world.

My Jesus, you were judged, but you never judged. Therefore, what Pilate said is true: “Here is the Man.” It is a terrible moment for you and your Mother Mary; to be just and innocent and, in return, to be severely treated by people who wounded your heart and the heart of your Mother, uniting them into one heart of suffering and pain. After a lifetime of freeing the innocent and protecting the rejected, you were made equal not only to the rejected, but also to the outlaws’. How it must have increased your pain.

Jesus, 1 promise now that will lower my fists and lay down my stick, which I have raised so many times on those around me. I also pray for those who are afraid to protect the innocent, the righteous poor and the ill.

Message: Dear Children! This evening in a special way I am calling you to perseverance in trials. Ponder how the Almighty is still suffering today sins. So when suffering com, offer them as a sacrifice to God. Thank you for having responded to my call.
(29 March 1984)

We thank you, O Mary, and we bless you.

Because by your sufferings you helped to redeem the world.

O Mary, I want to be with you here. You are alone and the world has joined its forces to destroy your Son.

You are not retreating even though you are helpless. You knew, as a Mother, how important it was to be near your Son in those most difficult moments. Here I am, Mary. I am accompanying you so that you will not be alone among people who hate, reject, condemn and seek death.

I am joining you with my love, my compassion, my readiness to be near those for whom your Son and you suffer.

Have mercy on us, O Lord!

Have mercy on us!

O Mary, Mother of Sorrows, Intercede for us.

Through her heart. His sorrow sharing, all his bitter anguish bearing, now at length the sword had passed.

Holy Mother, pierce me through,

In my heart each wound renew,